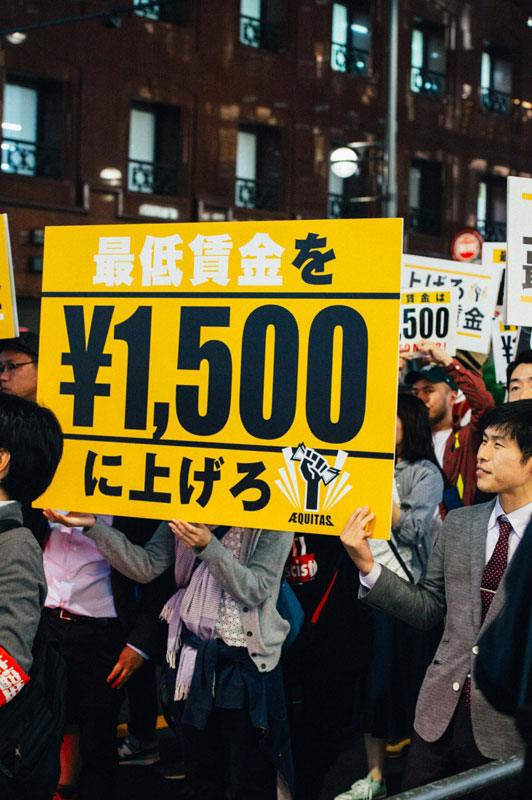 At an AEQUITAS demonstration.

Japan has also seen gradual increases in the minimum wage since economic disparity became a social issue in the first half of the 2000s, and with Tokyo Prefecture setting it at 907 in its 2015 revision there is finally a region with a minimum wage over 900. It still remains stuck at a low level, however, and the disparity between urban and rural areas is growing. Against this backdrop, activist organizations such as AEQUITAS (see footnote) have been created with the aim of increasing the minimum wage to 1500.

One thing movements to increase the minimum wage in Japan and the U.S. have in common is that they do not make getting workers into unions (organizing) and forming a labor-management relationship with companies a direct aim. In the past labor movements have won improvements in working conditions by raising the rate of organization and increasing their negotiating power. In both countries, however, the organization rate is now falling, and this is seen as a causal factor in declining wages. Here a labor movement that, while affiliating itself with labor unions, is seeking to increase the minimum wage without making organization its main focus is being developed.

Recently, however, the movement in America has added “union rights” to its slogan, making it “Fight for $15 and union rights.” This was done because while increasing the minimum wage is important, you cannot work and live with a feeling of security if you don't know when you will be fired or if the wages you are owed will actually be paid. How to revitalize the essential function of labor unions while at the same time expanding the labor movement as social activism on the theme of increasing the minimum wage remains a major issue to be addressed.

A session concerning the current state of labor movements in Japan and the U.S. grappling with these kinds of common issues was held under the title “Organizing Precarious Workers in Japan and the United States” at the 67th annual meeting (May 28th-31st, 2015) of the Labor and Employment Relations Association (LERA), an American association that deals with labor-management relations. 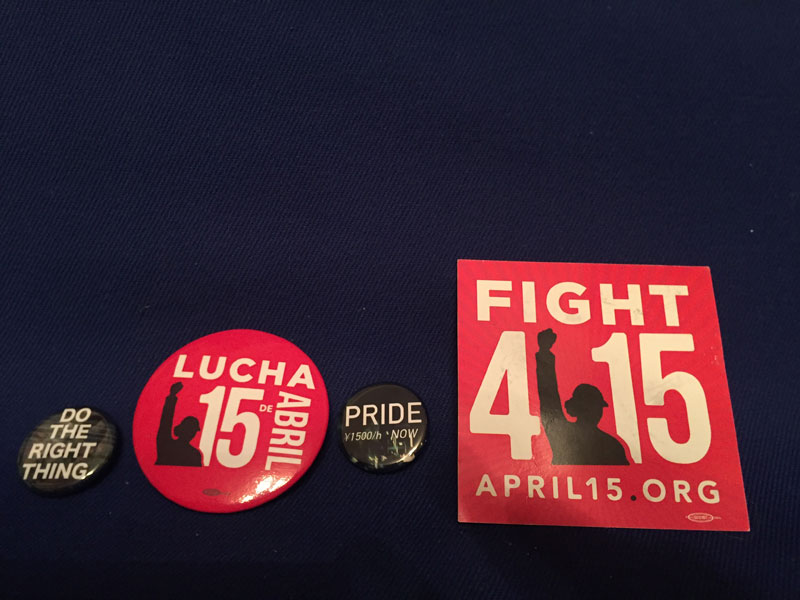 Stickers and badges calling for an increase in the minimum wage.

Amidst stagnation in the existing labor union movement, social movement unionisms have been led in Japan by individual affiliation unions (community unions) and in the U.S. by workers' centers. The researchers who participated in the session study individual affiliation unions and workers' centers, and I presented a report entitled “Organizing Young Flexible Workers in Japan.” During the session, sources of influence of individual affiliation unions and workers' centers and the learning process of revolutionary strategies were discussed, and the fact that, particularly in Japan, cooperative relationships with existing labor unions have not been adequately constructed was identified as a problem. I also got the sense that one of the characteristics of the union movement in Japan is its weakness in comparison to other countries when it comes to cooperation with other social movements.

AEQUITAS, a group seeking to raise the minimum wage, brings together people who have been involved in various movements since the campaign against the Iraq war, specifically the union movement, the anti-poverty movement, the anti-nuclear power movement, and SEALDs, and the methodologies and resources they have accumulated are being put to use. AEQUITAS has also engaged in unprecedented labor movement activities such as calling on political parties and politicians through street publicity and participating in “5/11 raising the employment and lifestyle floor action,” an initiative that transcended the national center framework of Rengo(the Japanese Trade Union Confederation)/Zenroren/Zentokyo(National Trade Union Council). While community unions have obtained many results since they first appeared roughly thirty years ago, there are some barriers they have not been able to break down, and observing this movement on the ground I feel the time may soon come when these walls too are brought down.

Note: “Aequitas” is Latin for “fairness” or “justice.” The group began in Tokyo in 2015, and there is now an “AEQUITAS KYOTO” and “AEQUITAS TOKAI.”