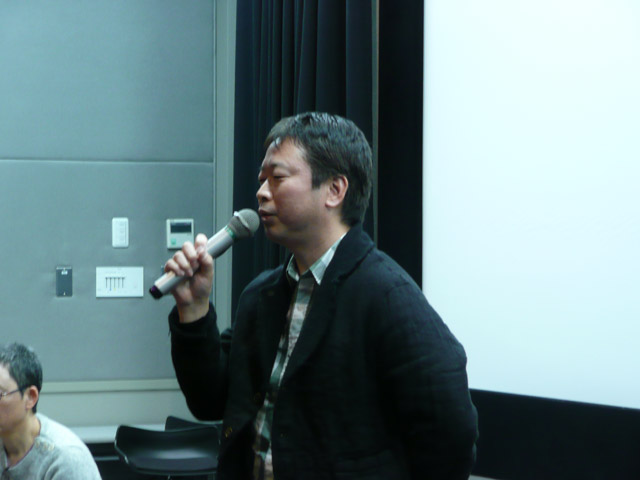 The Research Center for Ars Vivendi held a screening of X Years after Being Irradiated which was directed by Mr. Hideaki Ito on February 14, 2013. 49 persons participated in this screening. After the screening, lecture by Mr. Hideaki Ito and Q&A session, the Center held a small exchange party. Many people also participated in the party and had a good time taking with the director.

The message of this movie is clear–the fact that crew members other than the Daigo Fukuryū Maru are also bomb victims affected by the Bravo affair should not be lost in history. This documentary movie mostly consists of the scenes in which normal people talk without emotion. The words of Mr. Masatoshi Yamashita who have been investigating the incident and Ms. Junko Sakiyama who is the wife of the captain of the Second Koseimaru are also the director's insistence. Mr. Yamashita insists that facts not be lost in history. Ms. Sakiyama talks about the situation in those days when they were not allowed to proclaim and doubts whether the government does not let them know important information.

In the lecture Mr. Ito insisted that the reasons why he would like to cinemize the TV documentary and make it a voluntary screening be that they would like to clarify the actual condition of the Bravo affair by gathering people. He then emphasized that in order to do so, first of all, since it is necessary to find persons aboard tuna fishing vessels, he would like to gather students who go there and conduct investigation. At the same time, he suggested that he would like to make a database of its related materials and thus make an open circumstance that he can share information for the investigation. Furthermore, he pointed out that he might get knowledge about low level radiation by conducting this investigation. In the end, he said that since the effort has been made in the U.S, mainly by students, the U.S. and Japan can be expected to have collaborative investigation concerning this, and that they would like to clarify the entire picture by investigating crew members who were bombed.

According to questionnaires conducted on the day of this event, the majority were satisfied with this event. Especially, it seems that they were satisfied with this event since they understood the intention of this movie through the director's talk. Some noted that they knew the truth they had not known through this movie. Others noted that they felt the necessity to convey the incident to other people from now on. Also, it is found out that many participants are interested in environmental pollution.