Home» Research Highlights » “Basic Disability pension and the Disability Rights Movement: The Establishment of a New Guaranteed Income for People with Disabilities and its Political Dynamics.”

“Basic Disability pension and the Disability Rights Movement: The Establishment of a New Guaranteed Income for People with Disabilities and its Political Dynamics.”

In July of 2019, the year after I obtained my doctorate from Ritsumeikan University’s Graduate School of Core Ethics and Frontier Sciences, I got a job and moved to Nayoru City in the northern part of Hokkaidō. Nayoro’s winters bring temperatures of minus thirty and extremely heavy snowfall, but there is almost no wind, perhaps because it is located in the interior and there are no large mountains nearby. As a result it is a strange place that feels pleasantly cool rather than cold even when the temperature is below freezing. Here in Nayoro, in August of 2020 I published “Basic Disability pension and the Disability Rights Movement: The Establishment of a New Guaranteed Income for People with Disabilities and its Political Dynamics” (Akashi Shoten.) 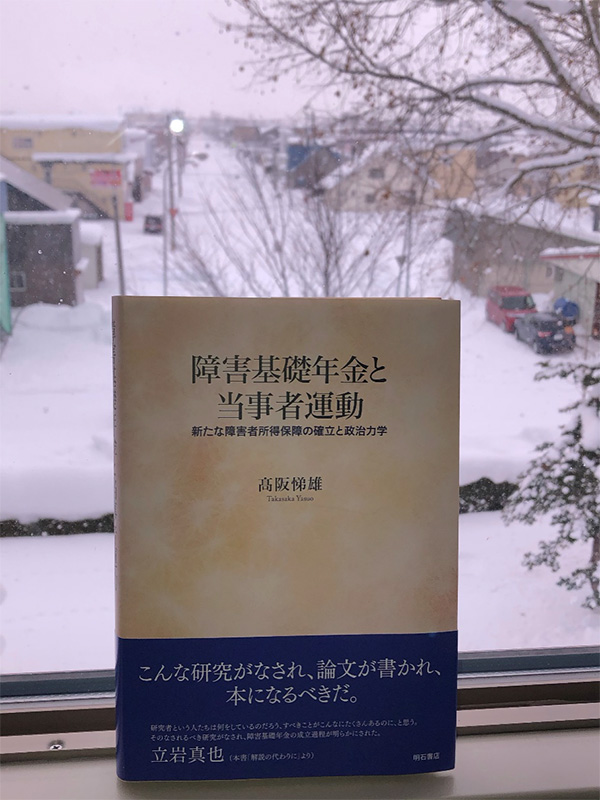 This book elucidates the process of the establishment of the basic disability pension created in the major pension revision of 1985, considered the most significant pension reform after the Second World War. The 1985 major pension revision was the reform that served as a starting point for the two-level pension system we have today. It was conducted with the aim of maintaining the national pension system, the financial situation of which had deteriorated, by making the national pension a basic pension in which all citizens were enrolled and shifting resources from mutual-aid pensions and employee pensions, in which most active workers were enrolled, to the national pension.

At that time there was a council in the government called the “second ad hoc reform commission” that was formulating policy proposals for financial rehabilitation. The chair was Dokō Toshio, a prominent businessman known as “mezashi Dokō” [because of his fondness for this humble breakfast of dried sardines], who promoted economic austerity and was highly regarded by the Japanese public. This Dokō ad hoc reform commission proposed many cost-cutting measures to the government, such as reducing pension benefits and privatizing publicly run enterprises such as the national railway. As a result of these fiscal cutback reforms carried out under the popularity of Dokō, the major pension reforms of 1985 meant that most citizens could expect to see their pension benefits greatly reduced.

Amid these reductive policies, the only measure to emerge that could be called an improvement policy was the basic disability pension system. Insurance is established on the fundamental principle of contributing premiums and receiving benefits. In the basic disability pension system, however, at the age of twenty people who have had a disability that met the standards for recognition as a disability in the national pension system from the time they were children receive the same benefits as people who have acquired a disability in an accident or other circumstances after having already turned twenty, the age at which citizens must begin contributing to the national pension system. In other words, the benefits of those who had not contributed any insurance premiums was raised to the level of those who had been contributing insurance premiums. Particularly among young bureaucrats in the Pension Bureau of the Ministry of Health, there were many who opposed this system, claiming that it went beyond the fundamental principle of insurance.

With the aim of solving the mystery of the creation of this kind of basic disability pension system, in my book I conducted interviews with politicians, bureaucrats, and people with a disability, collected magazines published by disabled people’s organizations and tributes to deceased bureaucrats, and attempted to trace the process of the establishment of this system through these many voices.

As a result of this research, two major aspects became clear regarding the formation of the basic disability pension. First, against the backdrop of the International Year of Disabled Persons, people with a disability raised their voices, bureaucrats and politicians who were moved by their appeals joined forces with them, an approach unifying contributing and not-contributing was constructed within the hidebound pension system, and the new and unprecedented scheme of a basic disability pension created. This can be considered the “realization of justice” aspect of the establishment of this system.

Second, it became clear that in order to pass a major pension reform that would increase the burden on most citizens in the Diet, there was a political role taken on by the basic disability pension and the disabled people’s movement that was demanding it, and that demands from people with a disability for things other than income security, such as nursing care security, having been dismissed was also the result of a political calculation. This was an aspect distinct from the realization of justice in which the basic disability pension and the related movement were used as part of a political bargain. After publication, I continued to have various thoughts about the people who provided testimony. Having pursued objectivity in my research, I think there may be aspects of my investigation that are not aligned with the wishes of the people who gave me their testimony and those connected to them. There is a great deal of energy that goes into giving testimony. I felt that their having nevertheless done so was the result of something that could be called a sense of obligation or tribute to those involved who have already passed away. I hope the human pattern woven from the voices of people with disabilities, bureaucrats, and politicians that is presented in this book serves as a guide when thinking about how policies regarding welfare systems for people with disabilities are to be formulated in the next era.