Home» Research Highlights » A “Place” of Memories of the Colonial Era: Ruins and Art in Kaohsiung, Taiwan.

A "Place" of Memories of the Colonial Era: Ruins and Art in Kaohsiung, Taiwan.

Kaohsiung is hot and humid in May. Leaving Japan after the hay fever season has finally ended and landing in Kaohsiung, this wet heat felt a little bit pleasant. It had been several years since my last visit. I booked a room on Zili 2nd Road, a location with good access to the train and close to the Liuhe Night Market.

The purpose of my visit to Kaohsiung was to give a presentation at the 6th Japan-Taiwan Asia Future Forum “Exchanging knowledge in East Asia: border crossings, memories, coexistence” (May 21st, 2016) held at the Wenzao Ursuline University of Languages.

On the day before the symposium I gave a guest lecture at a class taught by Tomoaki Kuramoto, a graduate of Graduate School of Core Ethics and Frontier Sciences in Ritsumeikan University and assistant professor at the Wenzao Ursuline University of Languages. This lecture was entitled “Video and photographs concerning ‘displacement’ and ‘home’:Traveling around Kumamoto Prefecture,” and in it I introduced Kumamoto, a region that had just been hit by a major earthquake in April of 2016, and, while showing some movie clips, gave a lecture on local languages and regionality. The movie clips were from Sandakan No. 8 (1974, directed by Kei Kumai) and Where Spring Comes Late (1970, directed by Yōji Yamada). My specialty is Hokkaido studies, but in recent years I have also roamed the western coast of Kyūshū with a base in Minamata. 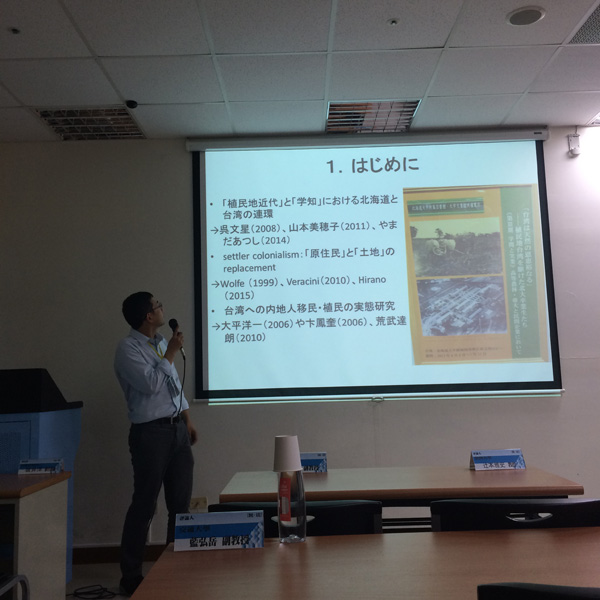 Giving a presentation at Wenzao University

I had heard it was a Christian university, so in the lecture I planned to use these movies to have the students learn about areas with a lot of Christians, such as Amakusa and Iōjima, Nagasaki Prefecture, and think about religious issues and the lives of “displacement” in islet regions. I was a bit worried about what kind of response I would get regarding non-standard languages in a place where an absolute value is placed on the correct “national language,” but the students’ reaction was excellent, and some of them even went back to finish watching the films the following day.

At the symposium I gave a presentation entitled “‘Colonization theory’ and the ‘colonial modanization’ in Taiwan under Japanese rule: Focusing on the relationship between Shinpei Gotō and Kumao Takaoka.” Regarding Gotō, who has been praised for his public hygiene and urban policy as well as industrialization, I situated the “mixture” of the social policy aspect and violent ethnic policy aspect of this figure in the context of intellectual history by establishing a connection to the study of colonies in Hokkaido, and at the same time addressed the necessity of bringing into this debate the political nature of the “distinction” between these two aspects (the avoidance of criticizing colonialism regarding the rule of Taiwan) in Gotō’s writings. At the symposium I received comments from Professor Nobuhiro Adachi (educational history, Wenzao University) and Professor Tatsuya Akae (political/religious history, National Kaohsiung First University of Science and Technology), and also managed to have a discussion with Professor Su Hsia Yang (Sakhalin history, National Chengchi University), making this a very fruitful event for me on a personal level.

What left the strongest impression on me during this trip was the Taiwan Sugar Museum, housed in the remains of a sugar factory from the Japanese period. The large compound is dotted with the remains of wartime air defense dugouts, including an “air defense bunker – wartime command center.” A path called “Evolution of sugar” is lined with enormous machinery and factory remains celebrating the sugar industry in first the Japanese and then the Kuomintang era. In a building that introduces sugar industry figures, Gentarō Kodama and Shinpei Gotō are the first to appear under the heading “Heroes of the sugar industry – a who’s who of the Taiwanese sugar industry dynasty.” It is as though a direct line is being drawn between the modernity constructed by the great Japanese figures of the colonial period and the prosperity of modern Taiwan. There is statue of Inazō Nitobe as “Father of Taiwanese sugar” at the entrance to the museum cafe, and I was very surprised to be told about Nitobe’s achievements by the cafe manager. 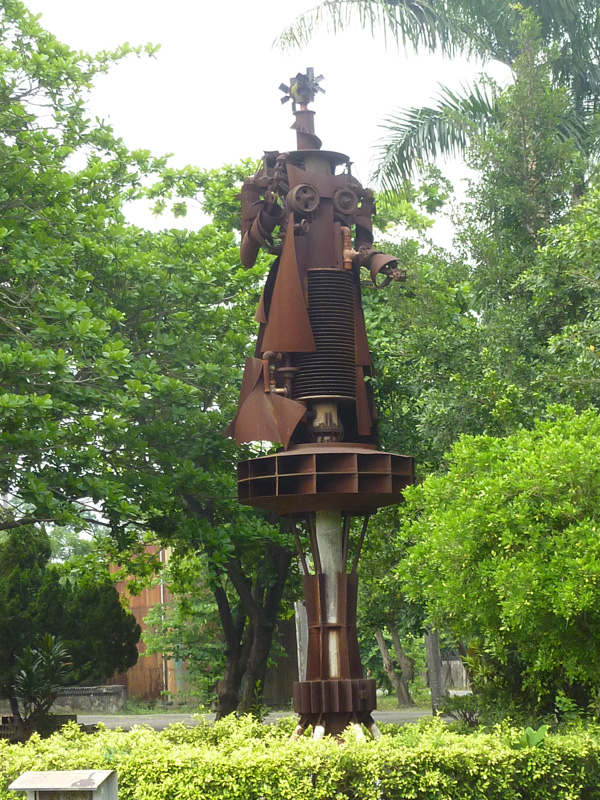 This museum is presented as a site “for people who like ruins” in Japanese guidebooks, but nearby there are blocks housing attractions such as the “Hanjing Visual Arts Museum” and the “By Wood Art Space,” and the area is also an interesting place to think about the connection between ruins (remnants of the colonial period) and art; I felt as though the more the sugar refining industry and massive machines spoke of a flourishing, the more the rusted tin pieces of art set up inside the grounds told a different story through the ruins of the end of prosperity. I also got this feeling from remains of the colonial era and art in redevelopment districts such as the “Binxian” memorial in the Takao Railway Museum. This sensibility may also lean toward a kind of idealization of the colonial period of the sort seen in the reframing of this era as a pure romance or the presentation of the hero of a native uprising as an embodiment of the Japanese spirit in director Wei Te-sheng’s Cape No. 7 (2008) and Seediq Bale (2011). The act of putting this sense of proximity to colonialism and utilization of ruins into words leads me to reconsider the framework of criticism of colonies that is a premise of my research, and presents a new opening into the colonialism buried in urban spaces.

This research achievement was financially supported by the research fund “international research activities,” a support system for enhancing the research quality of young researchers of the Research Center for Ars Vivendi in the academic year 2016.