Pondering Death and Leaping into Life: Interpreting Tattoos as Artwork

What do tattoos in today's Japan call to mind? (Note 1). Over roughly the past twenty years, tattoos of various styles have penetrated the youth culture, and there has been a marked increase in the number of tattoo artists too. On the other hand, tattoos and tattoo artists have tended to be persecuted in society, such as biased media reports that slander them as closely tied to crime, attempts to exclude them from the social system, and the enactment of regulations to prohibit them from participating in public events and spaces.

The negative view of tattoos stems, in part, from the colonialism and the progressivism of modern Japanese. Up until the Meiji period, the tattoos of Ainu and Okinawan women appear to have been both proof of their having reached adulthood and a form of personal adornment meant connect them to their ancestors and guide them on their journey after death. The Japanese tattoos I study, horimono, also became very popular during the Edo period as a form of exquisite physical beauty that celebrates the auspicious and the chivalrous spirit. But in the midst of Japan's unification as a modern, civilized nation, this practice was consigned to the culture of “barbarians” and “outlaws from a previous era.”

In recent years, however, various points of debate have emerged regarding the tattoo phenomenon. In the West, since the 1980s, tattoos have been used to differentiate oneself from the others, as well as seek self-identification. Accordingly, there has also been an increase in discussions on this phenomenon in the fields of philosophy and psychoanalysis. In Asia and Oceana, since the 1990s there has been a movement to regain ethnic identities that have been lost through modernization by reviving tribal tattoos. In the past few decades, tattoos have come to be understood, both in Japan and overseas, as something that gives form to the relationship between mind and body, and the individual and society. In other words, tattoos are seen as the figuration of the relationship between oneself and others on the skin―surface of the body area―that both physically separates oneself from the outer world and acts as a cultural border between the two.

“Why do people engrave pictures on their skins by tattooing?” This is the simple yet fundamental question with which I am grappling. The discourse on art theory and aesthetics discusses why people create works of art, judgments of sense and taste, and what art is. So, is tattoo art? If we call tattoo as a work of art, what kind of artwork can we define it as? These strange pictures are not drawn but “engraved,” and they disappear along with the death of the person who wears the tattoo; they can only be seen in their entirety when their wearer looks in a mirror, and are not necessarily ever appreciated by anyone at all. What's more, they are accompanied by pain and expose the recipient to the risk of infectious disease. Nevertheless, since ancient times people have inked highly stylized animal and plant designs into living human skin (Note 2). With the skin as their canvass, people tattoo unique, indelible pictures on their skin to try to express something. What is that desire to express something through a tattoo?

I have analyzed horimono (ほりもの, a kind of Japanese tattoo whose decorativeness and artistic performance was developed after the Edo period and positively accepted by the recipient of the tattooing) represented in literature, ukiyo-e and paintings, and revealed that people in Japan are transformed in accordance with the pictures that have been tattooed on them. That is to say, tattoos are a “metamorphosing apparatus”. The role of this horimono developed through the kabuki-mono concept which occurred around the end of the Sengoku period (the age of civil wars, ca.1490-ca.1570). Japanese dandy men thought that life at this moment was ephemeral and wanted to confirm the existence of their self at that moment, as they could die any moment. And most importantly, they expressed their idea with gorgeous, eye-catching costumes. This idea was inherited through various changes, and the tattoo became very popular around the Bunka/Bunsei period (1804-30). During this transient, decadent and hedonistic era, there was a shift from the stigmatizing irezumi (入墨, a kind of Japanese tattoo given as a punishment) to the independently chosen horimono. People who were depressed in society assimilate and metamorphose themselves by having a symbolic picture of a hero, religious motif, animal or plant tattooed into their skin, and gave their own direction to their lives in the floating world (Fig.1).

So why is it that tattooed pictures are able to define individuals with an external power? Currently, I am conducting interviews with elderly horimono artists to study their work, the pictorial elements of horimono, and the relationship between these artists and their clients. Their work is rooted in a clear view of life and the works they create. They pursue artistic expression from single lines to subtle gradations of color, and do not neglect the technical side of their work and the tools. One of them not only carefully selected the maker and thickness of his needles, but honed each of their tips to improve their imparting of color and lessens the burden on the body of the client. Their detailed, meticulous preparations before beginning a horimono unmistakably convey the earnest dedication with which they approach their human canvasses (Fig.2). On the other hand, they value the importance of the historical origins, meanings and arrangements of iconographies, and also teaching their clients the rules and attitudes of having tattoos. The key to future research, therefore, is the coexistence of respect for individual lives and values and a totemic social order.

Death will come to us at some unknown time, and our bodies will decay. Based on this fact, there is a keenly desire to position and confirm society, culture and the self on this body that exists here and now. “The tattoo as a picture” confronts this desire.

(Note 1) It is important to note that it is customary in Japan to distinguish between irezumi, a tattoo that was given as a punishment in the Edo period, and horimono, a tattoo received of one's own volition. This terminological distinction itself is illustrative of the multi-layered and strong beliefs attached to tattoos.

(Note 2) This can be confirmed in the mummies of warriors and the “Princess of Ukok” (5th to 3rd century B.C.E.) discovered in the Pazyryk burials in the Altai Republic's Ukok plateau.
http://siberiantimes.com/culture/others/features/siberian-princess-reveals-her-2500-year-old-tattoos/ 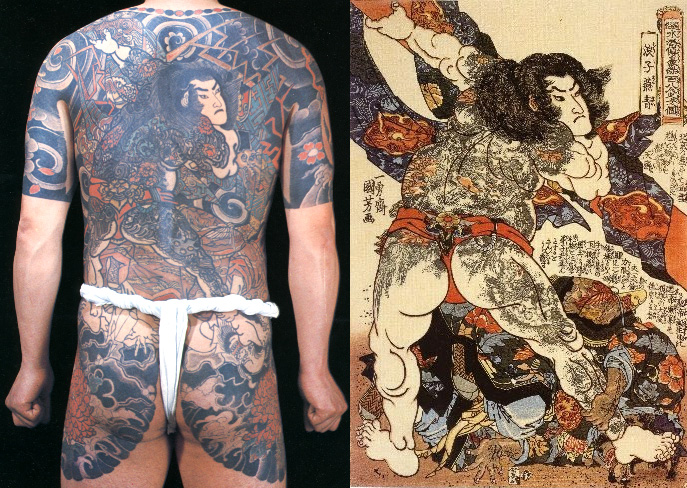 An example of a horimono copy of an ukiyo-e depiction of the hero of Water Margin. The client requested this double-layered “horimono of a character with horimono.” The style and details of the main picture and background are different, and the differences between horimono and ukiyo-e and the artistry of the horimono artist are made apparent.

Left top and bottom: Tools used by two horimono artists, born sometime in the late 1940s or early 1950s. The tools mentioned in this article belonged to other artists, who are also particular about the kind of paper they use to wrap them; it can indeed be said that for these artists “my needles are my life.” Published in TATTOO BURST , vol. 50 (July, 2009), Koamagajin, pp. 24-25.

Right: Old pictures of needles. The one on the far left was used for making lines (suji-bori), the others for inserting gradations (bokashi) or daubing (beta) of colors. Published in Tadasu Iizawa, Katsunari Fukushi eds. op. cit., p.250

If we compare the photographs on the left and right, it is clear that the way the needles are set has become more sophisticated.