Home» Research Highlights » People Live Their Lives to Express: From the Field of “Madang Play”

People Live Their Lives to Express: From the Field of "Madang Play" 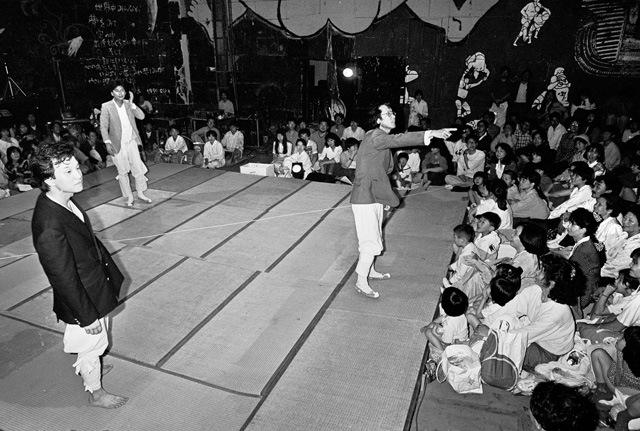 My research field is the field of “expressing the art of living” if I borrow Ars Vivendi's words. A new type of play, “Madang Play,” which incorporated elements of traditional masques of Korean Peninsula, was born in Korea from the late 1960s to 1970s. In the mid-1980s Zainichi Korean (Korean with the status of permanent residence in Japan) and Japanese young people gathered to perform the “Madang Play” in Kyoto, Japan. They positioned places of expression activities as “places for Zainichi Korean to retrieve stolen ethnicity and humanity, and places for Japanese to free themselves from repression of the Japanese society” (call of Hanmadang) and sought coexistence of Zainichi Korean and Japanese people. In the Higashi-kujo area, Kyoto, their base of operation, a festival of “Higashi-kujo Madang” whose ideals are acquitting oneself and coexistence has been held to generate new expression. Focusing on this kind of phenomenon and clarifying the relationship between human “lives” and “expression” is my research theme.

“Madang” means a garden and square. The Madang Play is the play, including an improvisation, performed by a musician, a performer, and an audience in a round space with a diameter of about 10 meters, with no stages or stage settings, which is surrounded by the audience. The play can be said to be a place of altered formation which flows in “nowhere”—time and space. Expression in the Madang Play is not left as a thing and not fixed as substance—it is pure constitution of will of those who happens to be there and it is also regarded as the universe constituted by will. 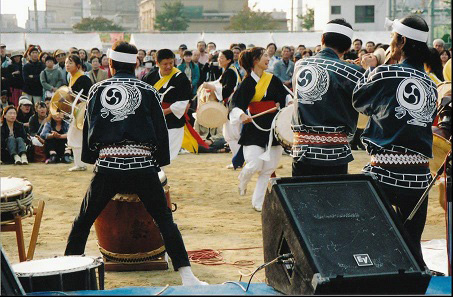 The relationship between the Madang Play and the Higashi-kujo area is also my research subject. Higashi-kujo has the largest residence of Zainichi Korean in Kyoto and it is the area where many Zainichi Korean and needy persons lived throughout the prewar and postwar period. The area once had multiple discriminatory structures on the one hand and a unique lifestyle has been rooted there on the other hand. For example, in the morning of lunar midautumn harvest festival which is called as Chuseok offerings for worshiping one's ancestors are left on the side of the road in Higashi-kujo even now (*1). Although the offerings are left on the guard rail of the road and they look as if they were garbage, I feel a contributory factor of the richness of expression created in Higashi-kujo because I can see in its scenery that the offerings are directed to the heaven firmly and they constitute a small universe which connects this world with the heaven.

My past research has been to describe how many human “lives” have existed and how they have interacted/counteracted each other in expression activities in the Higashi-kujo area and I am still on the road to it. The process of plays/festivals created by people who go into the workforce, go to school, worry about their jobs/human relationship/family relationship, and fail is exactly the work of expressing the “lives” themselves— being frantic to live worrying about their own roots and their way of living, and being pressed by work, family, and child-raising. This provides me with a new question of whether expressing itself should be a purpose of living of human beings and the fundamental figure of human beings as the act of “living” includes the act to express. My future research should be to demonstrate this question.

Such consciousness led me to creation of the Mandang Play in Higashi-kujo Madang this year. Using the expression of “Miyaru Harumi” (elderly lady Miyaru) in the masque, I reflect the will that the fact that a person has lived cannot be erased by anyone. Gestures and rhythms of dancing in the play have the will of people who connect lifestyles and expression in Higashi-kujo. Please come and join us at Higashi-kujo Madang on November 2!

*1) At the end of the ritual a bite-sized offering should be left in front of a house etc.