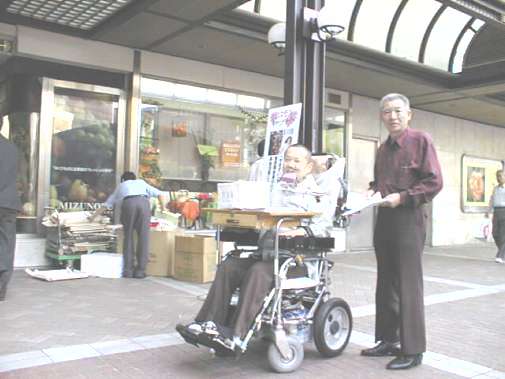 Mr. Ohama, president of JSCF,
is conducting fund-raising drive
on the street.

Now it is said that there are more than 100,000 spinal-cord-injury (hereafter SCI) and about 5,000 persons become SCI every year in Japan. So far, the following medical opinion on the SCI has commonly been accepted: once the central nervous system was injured, it could not be regenerated. That is, SCI has been regarded as an un-curable injury. However, the development of regenerative medicine research (especially stem-cell research) creates the possibility of cure of SCI. This leads to establishment of a group of SCI to promote the research—that is, JSCF.

Then, how does the involvement of the group of persons with illnesses/disabilities with regenerative medicine research work on research itself and what does this involvement mean?

In foreign counties promotion activities of life science research by groups of persons with illnesses/disabilities have been actively conducted. Actually, these activities make the research itself brisk in some cases. For example, the Hereditary Disease Foundation (1974-) in the U.S. was established by families of patients with Huntington's disease. Their main activities were gathering researchers to promote medical research, publicizing and fund-raising for research. Its activity greatly contributed to the finding of marker gene which specified where the Hereditary Disease gene existed in the chromosome. Moreover, PXE International which was modeled after the Hereditary Disease Foundation established the Genetic Alliance Biobank (2003-) together with other groups of persons with rare intractable diseases. The Genetic Alliance Biobank is the organization in which the patient group itself collects, preserves, and distributes biological samples. It is also actively involved in research promotion and patent application with collaborating scientific researchers. Through these activities, a new model of scientific research by the initiative of the groups of persons with illnesses/disabilities is being constructed. Such citizen-science alliances are also starting to garner attention in Japan.

JSCF, established in 1996, is the group which was modeled after the International Spinal Research Trust in U.K.(1980-). Since then, JSCF has formed the relationship with groups of persons with illnesses/disabilities in foreign countries and domestic researchers of regenerative medicine and developed its activities of publishing newsletters and investigations. For example, in 2004, JSCF participated in the clinical trial of bone marrow stromal cells transplant for acute spinal cord injuries which was planed by Kansai Medical University and Kyoto University. Upon the press release of the clinical trial, JSCF sent questions to researchers who would conduct the clinical trial and kept communicating with them. I focus on this process and am analyzing problems of the clinical trial from the viewpoint of the citizen's participation in science. There arise both difficulty of scientific communications between professionals and persons with illesses/disabilities and problems of scientific policies including complete standard of protocol and publicity of the Institutional Review Board. 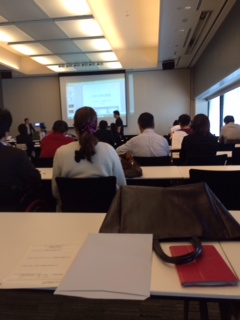 At the seminar on
spinal regeneration research