Home» Research Highlights » Past and Present of Local Medicine in the Nishijin Area of Kyoto: Tracing the History of Residents’Movements for Medicine

Past and Present of Local Medicine in the Nishijin Area of Kyoto: Tracing the History of Residents’Movements for Medicine

These days the local medical system has been collapsing and it requires local residents to be proactive in participating in medicine and welfare with local governments and companies to share local medical resources. Yet what does it mean by “residents' proactive participation”? The question of whether we ourselves are the subject of medicine and welfare leads me to conducting research on transition of local medicine.

Movements for medicine with residents' proactive participation have existed since early times. Labors and farmers, who have been alien to medicine, have conducted movements to protect themselves since prewar periods. After the war residents have been involved in medicine at villages without hospitals, farming villages and towns around underpopulated area. One of the movements is movements for medicine in Nishijin area, Kyoto.

Kyoto has many small companies and many labors have been actively involved in labor movements or movements for medicine since prewar periods. These movements have become linked to the movements by labors of weaving in Nishijin area and then spread to movements with focus on health. Around 1950, when there was no medical insurance, crafts in Nishijin established Shiramine Clinic with their own contribution in order to protect their own life and health. It can be said that behind this was the local residents' regional characteristic based on its structure that an obi or kimono is made by each operation's collaboration. Also, industrial homework of Nishijin textile required workers to borrow a weaving machine from textile manufactures, weave at home and be paid in proportion to output. As a result, it produced a lifestyle with clothing, food and housing and illness of people including crafts was basically cured at home. Residents in Nishijin invested in Shiramine Clinic and made its local medical system that fitted their life while developing movements that made approaches to the government for social security concerning medicine and labor.

In 1960s while the social security system was fulfilled through universal health insurance coverage and the Act on Social Welfare Service for Elderly, the social structure has been changed through development of the nuclear family as a result of change of the industrial structure, change of illness as a result of development of medical technology and increase of elderly population. In 1970s the recession and delay in responding to medical care for the aged led to problems of the aged. In Nishijin its aging population, the recession of the industry, young declining popularity of the industry and change of local residents' life made the residents' requests for medical care vary and thus, the meaning of “hospital for their own” at the time of establishment also wavered. The difficulty of maintaining the management of the medical institution via investment from the residents appeared and there occurred conflict among residents or between residents and medical staff around this time. Since 1980 problems of the aged have become obvious nationwide including problems of care of the bedridden aged or aged with dementia. Movements whose emphasis is on local welfare activities have been conducted actively in Nishijin, too. 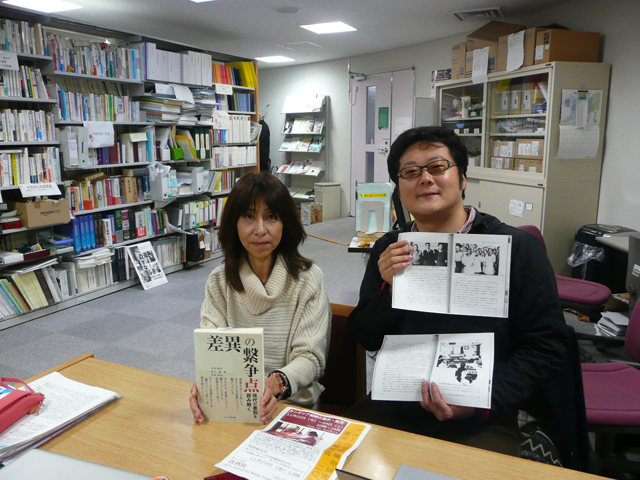 ( With Dr. Nakakura at the time of academic paper tutorial, the library of the Research Center for Ars Vivendi )