To Understand the Current “Okinawa Problem” from their Historical Contexts

On October 1, 2012 an MV22 (Osprey) flied in the fair sky of Okinawa after the typhoon had passed. The Japanese and U.S. governments deployed the Ospreys in Okinawa in spite of objection of people there. The deployment of the Ospreys in Okinawa makes us reface the “Okinawa problem” because militarization, oppression of autonomy and independence and crisis of survival in Okinawa progressed in a grotesque way.

To begin with, what is the “Okinawa problem”? It is often regarded as the issues which people in Okinawa face there. TV and newspaper coverage often report that Okinawa governor asks the Japanese government to stop the deployment of the Ospreys. We probably tend to see the scene as if we were bystanders.

I have kept examining these questions through social movements, especially “Okinawa struggle (Okinawa-tousou)” in which people in Okinawa, Japan and foreign countries fought hard over Okinawa's “reversion” to Japan in 1972. I have been interpreting many fliers, journals and articles of magazines and newspapers groups of the movements or individuals had left, and interviews of people who participated in the Okinawa struggle in those days. Social movements are cites themselves which are shaken since recognition of the Okinawa problem is always questioned.

For example, in late 1960s anti-Vietnam war movement in Japanese “mainland” actively regarded Okinawa as an issue to be solved. Okinawa and the Japanese mainland conducted various activities together, such as sit-in protest, demonstration, publishing of a notice of opinion in magazines etc. in order to remove the military presence in Okinawa. 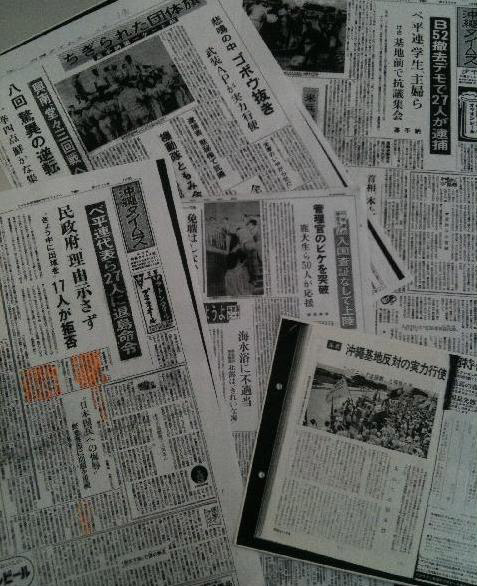 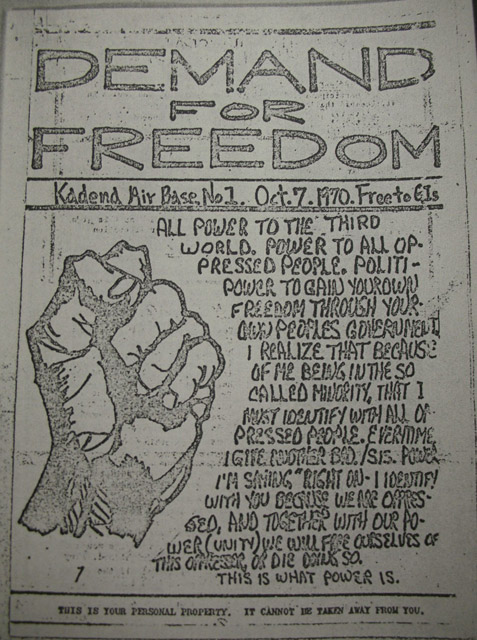 Okinawa, Japan and U.S. soldiers spontaneously examined bases and military forces in Okinawa from their standpoints, shared their experiences and thoughts and tried to fight together. There were many people who considered “The Okinawa problem is our own issue”.

However, that various actors regarded the Okinawa problem as their own issue generates a lot of conflicts and tensions at the same time. Okinawa, Japan and U.S. soldiers—the realities they live in are totally different. For people in Okinawa, U.S. soldiers and Japanese are also perpetrators themselves. However, for Vietnamese, people in Okinawa are also perpetrators themselves. The inside of Okinawa has such differences as regions with/without bases. Considering the Okinawa problem broadly lets people experience both solidarity and conflicts.

I would like to understand rigid recognition of the “Okinawa problem” from their historical contexts and generate another line and relationship by examining the actual aspects of solidarity and conflicts of the Okinawa struggle in a detailed way.