Re-experiencing the World of Multi-languages through Literary Works

When we study foreign literature, it is important to understand not only the language used by the author but what language(s) was/were spoken around the author. This especially applies in case of authors of Polish Jews, such as Bruno Schulz, whom I have been studying.

Schulz was born in the city of Drohobych in 1892. Drohobych was located at the area called Galicia (today's western part of Ukraine), where the Habsburg Monarchy annexed when the Republic of Poland was divided and conquered by the neighboring major powers at the end of 18th century. It was a multi-cultural area that Polish and Ukrainian people consisted of the majority of residents there, and Austrian reigned on it. The Schulz family belonged to assimilated Polish Jews which was positioned at high level of the society.

It was after World War I, when the Habsburg Monarchy was demised and the city was reintegrated into the territory of the Republic of Poland, that Schulz started writing novels. He published The Cinnamon Shops and Sanatorium under the Sign of the Hourglass in Polish in 1930s. Then when the World War II broke out, Drohobych was placed under the Nazi regime, and Schulz was shot to death on a ghetto street in 1942.

Although Schulz published most of his novels in Polish, he always planned to enter the field of German-language literature. As an Austrian citizen, Schulz studied Germany at “gymnasium”, and worshiped Thomas Mann and Rilke. Some of his novels dealt with stories that the leading character's father was transformed into a crawfish or cockroach and that was clearly influenced by Kafka. Schulz was not only a regular reader of Kafka's works but translated Der Process into Polish in 1936.

In Eastern Europe at that time many authors as well as Schulz were either bilingual or multilingual. Using of multi-languages was seen in many Jewish or Ukrainian authors whose national languages did not yet exist while many ethnic groups won independence in Eastern Europe in the early 20th century, and Polish and Czech consequently became national languages. For the Jewish or Ukrainian authors mentioned above, their multilingual skills were not wilingly chosen as free speech subject. Rather, it proved their linguistic inexpertness compared with native (mono-language) speakers. We tend to envy multilingual speakers in the context that we are in Japan without much struggle of mono-language use, but we should be more careful of inconvenience under the bilingual situation.

However, there existed some authors who affirmatively revalued the benefit of the mingled multilingual situation in Eastern Europe as the full possibility of rich expressions. For example, it was known that Kafka found the possibility of free expressions in such minor languages as Czech and Yiddish, not such major languages as Germany and French. Although Kafka published his works in Germany, we need to find echoes of multi-languages which existed around the author in his works.

The same applies to Julian Tuwim, who was a Jewish Polish poet and had a close relationship with Schulz, and Debora Fogel, who was a Jewish poet and Schulz's ex-fiance. Tuwim had strong interest in Esperanto and he actively incorporated surrounding multi-languages such as Esperanto, Russian, and Romani into Polish and wrote many experimental poems for seeking a possibility of the universal language. Fogel actively used Yiddish – one of the Diaspora languages – as global literary language like the modern English and sought a possibility of a new Jewish literature which was open to the universality by writing poems both in Yiddish and Polish.

It is often said that literature is art, not history. However, it is also true that works are born in the context of a certain historical condition. Reading Schulz's novels historically means rearranging them into the multi-language situation in Eastern Europe where Kafka, Tuwim, and Fogel existed. Although Schulz is now regarded as one of the representative authors in Poland, we need to reexamine it critically.

“One must eliminate the seductive cross talk of birds – their pointed adverbs and prepositions, their skittish pronouns – and work oneself slowly to a healthy grain of sense. The stamp album serves as a compass in my search.”

This is the citation from Spring, which describes a stamp album that trigged political revolution. Here we can interpret that Schultz tells a dream of a certain kind of “universal language.”

Schultz was not only a novelist but an art teacher at gymnasium, and also an amateur artist who self-published a collection of prints, The Book of Idolatry in 1920. It can be said to be Schultz's originality that found a new possibility of writing in the stamp album colored with the world's national flags. Schultz added illustration to his novels by himself and regarded the visual image of works as important. 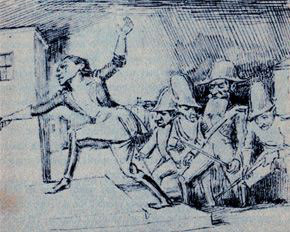 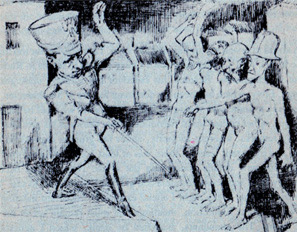 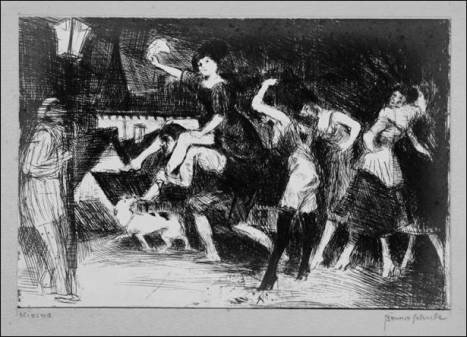 Yet, different from pictures, which can directly attract across language barriers, seeking the universality in language art requires tremendous efforts. In Spring, the story ends with the scene that the protagonist Józef is arrested by the military police after dreaming an irreverent dream. Does this mean that “the universal language” he found in the stamp album was a pipe dream? We need to reexamine Schultz's novels reflectively to image a different history that could have existed since we know the history after the Holocaust. In doing so, we should not examine his works as mono-nationality or ethinicity.

The purpose of my research is to clarify what could be achieved by Schultz through his works by comparing with those of Kafka, Tuwim, and Fogel, who were either in Poland or outside it. I think that we can learn a lot from authors who existed more than a half century ago but aimed for free linguistic expression with similar hardships of multi-languages when we think about recent issues concerning globalization issues which lead both to easy access to multi-languages and to rise to linguistic nationalism.