The “Revised Basic Act for Persons with Disabilities” was approved unanimously in the Japanese House of Councilors on July 29, 2011, and promulgated on August 5, 2011. This act designates dactylology (sign language) as part of “languages” in the Article 3-3. This is the first law in Japan that admits “languageness” in dactylology.

This is very important for the education for the deaf children. Recent education for deaf has been applying latest technologies such as digital hearing aids and artificial inner ears, as well as dactylology. However, in conventional education for the deaf children, dactylology was rather neglected as people had a prejudice that profound dactylology among the deaf and hard-of-hearing was shameful. In such conventional education, the deaf people were supposed to make an effort to pronounce words as in the way of hearing people. Therefore, a number of problems still remain today, including how to develop Deaf identity of the deaf people (negative self development, difficulty in personal relationships, frictions among family members, etc), how to acquire Japanese literacy, how to get a job, how to live daily lives, how to take part in social activities, etc.

I conduct research concerning identity development (Deaf identity) of the people with deaf and hard-of hearing because the “Deaf” people have different communications and languages from the hearing people in terms of identity development and such differences between the two influence on the relationship between the Deaf people and their families. I, therefore, am conducting participant observation concerning group activities “deaf and hard-of-hearing people” participate in. Now I am still in the process of collecting data, but thus far I can argue that the way of emotional interactions influences the relationship between identity development of the people with deaf and hard-of-hearing and their families. I am also interviewing families of the people with deaf (mainly their mothers), and studying human relationship among the family members. 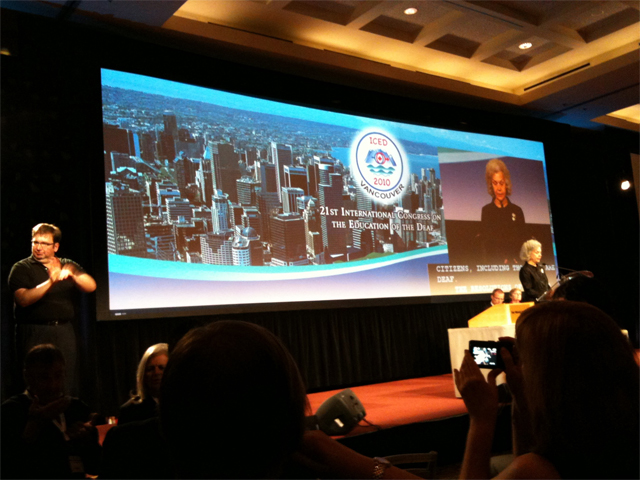 The most authoritative congress in my research field is the International Congress on Education of the Deaf (ICED). ICED has a long history: the first conference was held in France 1878, and the second was in Milan in 1880, which was called “Milan Congress.” In the resolution made at the “Milan Congress,” dactylology was not endorsed and the oral method was encouraged instead. After 130 years from then, the 21st ICED held in Vancouver, Canada, in July 2010, decided that they do reject all the resolutions of the “Milan Congress” that neglected dactylology. The “Vancouver Congress” encourages dactylology while the “Milan Congress” rejected it 130 years ago. The “Vancouver Congress” admits that the “Milan Congress” brought about “harmful outcomes,” and encourages dactylology in the education for the people with hearing disabilities by stating that the educations of the deaf in all the countries should respect both languages and other communicational methods. At the moment of this resolution, the participants gave standing ovation, and enthusiastically shouted “Today, the history was made” in dactylology.

I participated in this ICED in Vancouver in order to give my paper, then was able to witness this historical moment. For me, the researcher who studies psychology of children with deaf and hard-of-hearing, it was indeed a delightful moment. In Japan, dactylology was finally designated as part of languages, and was internationally encouraged by the Vancouver Congress of ICED. I would like to contribute to the education and supportive activities of the children with deaf and hard-of-hearing in Japan by propagating dactylology (Photo: Ms. Marguerite Henderson, a member of the board of ICED officially stated that they do reject all the resolution of the “Milan Congress”).