East Asia Disability Studies Forum 2020 was held online on Saturday, July 18th, 2020. East Asia Disability Studies Forum is held by organizations in Japan, South Korea, China, and Taiwan on a rotating basis, and according to the regular rotation this year it was scheduled to be held at the Suzaku Campus in Kyoto. As a result of the effects of COVID-19, however, it was held online (using Skype Meet Now) and the theme became “COVID-19 and Persons with Disabilities in East Asia.”

Until last year, holding international seminars online was not something with which we had much experience, but for this seminar we managed to transmit the video of the seminar conducted using Skype and distribute it with Zoom Pro. If it had not been for COVID-19, panelists and interested parties from each group would have gathered at a venue in Kyoto, and the seminar would have taken place in a format in which everyone would have been able to speak and ask questions. Since this could not be realized, we discussed holding just the seminar online, but this would have limited the number of participants and resulted in a much smaller event. This would have been a waste of this opportunity, so it was suggested that we could distribute the online seminar online. As the seminar was to be conducted in English, however, this meant we would need simultaneous interpretation into Japanese, as well as sign-language and subtitle interpretation.

When the online office of Institute of Ars Vivendi heard about this plan at the first meeting on June 16th we got to work on it, starting with understanding “what sort of event is being proposed?” Drawing up diagrams, we reached a common understanding of things like the flow of information and where people would be positioned (See Photo 1). In doing so we were especially careful to avoid misunderstandings, because interactions both within the office and with outside companies in charge of interpretation had to be done via email without the opportunity to meet and confirm things in person. There were many people involved we had never met in the flesh, and it was only the day before that even our office personnel gathered in the library of the Institute of Ars Vivendi that was to be used as a broadcast center for the first time.

While at the same time keeping in mind processing capacity in relation to things like the number of participants and the amount of data transmission that could be accommodated, we moved forward with selecting services, applications, and equipment. After buying video transmission equipment we tested it twice to make sure it would function without issue, and once it was confirmed to be working properly we began “recruiting observer participants.” Setting up software could be handled by email, but since preparing hardware such as IT cable outlets, computers, and equipment for transmitting video required someone to be there in person there were many times we were thrown off by the difference in “pace” between these two aspects of information technology (See Photo 2).

Some technical difficulties did indeed arise on the day, but thanks to receiving a flexible response they didn’t become serious and we were able to successfully execute “an international seminar conducted in English, but with simultaneous Japanese and sign language translation.” Professor Osamu Nagase, who coordinated the seminar as a whole, said he thought this was the first such event ever attempted in Japan. As it turned out we often didn’t know how we should do things, so our days in the short period leading up to the event were filled with looking things up and figuring out all kinds of mundane details through a process of trial and error. We had the anxiety of not knowing whether we could really pull it off right up until the end. By actually holding the event, however, we realized that it really wasn’t so difficult once you know what you are doing. While it is important to continue to think about a “guaranty of information accessibility,” at the same time I hope that what currently falls under this rubric becomes so common it is taken for granted.

Photo 1
Diagram at a stage approaching completion. At this point we were planning to accept questions. 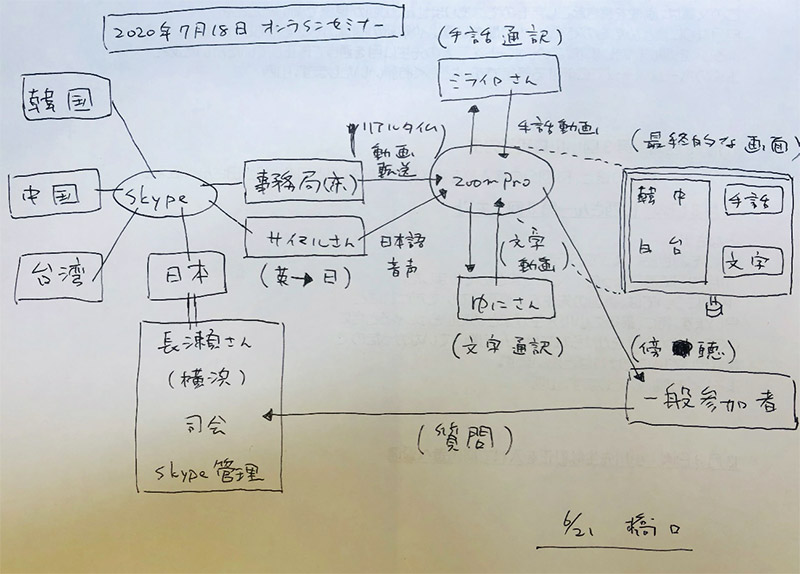