Lecture by Dr.Boris Cyrulnik & Symposium "Save Yourself and Life Calls You (Sauve-toi, la vie t'appelle)" 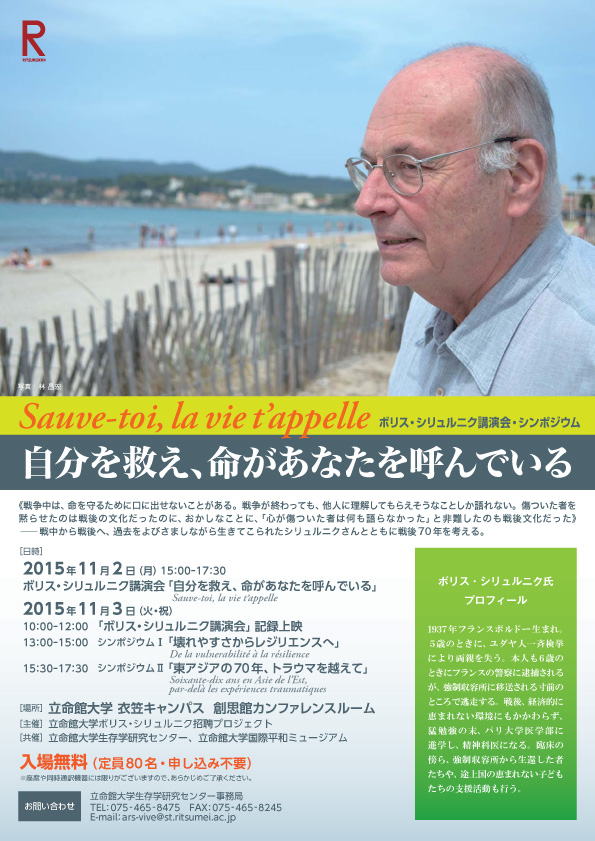 *There is no parking available at the venue, so please use public transportation.
Participation：Free of Charge (The Seating Capacity Is 80 / No Advance Application Necessary)
* Please note that the number of seat and simultaneous interpretation device is limited.

“During the war there are some cases we cannot give voice in order to protect our lives. Even after the war we can talk only about things others can understand. Although it was the postwar culture that silenced the persons whose feelings were hurt, the strange thing was it was also the postwar culture that criticized that the persons whose feelings were hurt had not talked about anything”. We will consider postwar 70 years with Dr. Boris Cyrulni, who has lived during the war and after the war, calling the past to our mind.

Dr. Boris Cyrulnik was born in Bordeaux in 1937. When he was 5, he lost his parents due to the roundup of the Jewish people. When he was 6, he was arrested by the police in French. Although he was about to be taken in a nazi-led concentration camp, he avoided detention by hiding for a while. After the war, although he was under an economically deprived environment, he studied medicine at the University of Paris as a result of intensive studying. Then he became a psychiatrist. While he has been involved in clinical medicine, he has also conducted support activities both for survivors from concentration camps and for underprivileged children in developing countries.